A hundred and fifty years ago, what is now known as the South Hampstead Conservation Area was a piece of open, unspoiled countryside – the most rural place, it was said, within two and a half miles of Oxford Street.  Part of it lay on the high ground sloping up to the newly constructed Finchley Road to the east.  The rest was low-lying farm land, stretching westward towards Kilburn and criss-crossed by small streams.  The late owner of these fields, Sir Thomas Maryon Wilson, had decreed in his will that his heir should ensure the land remained undeveloped.  Consequently the dust heaps and building debris which marked the progress of suburban sprawl on its perimeters were mostly invisible to the local people who enjoyed the open space. “Our nursemaids and babies,” wrote a Kilburn resident to the Times in 1896, “have found health and amusement in (Sir Thomas’s) hayfields on summer afternoons; our boys have played cricket and football and flown their kites in his meadows, and innumerable young couples have rambled by moonlight along his footpaths or spent their pleasant hours of courtship under the shade of his trees.” On the Kilburn side of this charming spot were the edges of the Cotton Estates, also as yet hardly developed.
​​

​So agreeable was the area that when Sir Thomas’s heir died, ending the immunity conferred by the will, the locals talked of buying this portion of the Maryon Wilson Estates to make a park; but at a likely price of £100-200,000 this was not a feasible proposition.  So from 1869, the inexorable process of suburbanisation began.

Over the next twenty-five years, Spencer Maryon Wilson, Sir Thomas’s great-grandson, carried out a programme of planned development in the region.  We have Sir Thomas’s will to thank for ensuring that the streets that were now built there have a well-defined entity and homogenous character. Had building not been restricted earlier, the area would have been invaded by the tail ends of streets running up from the south and the result would have been a more mixed, less harmonious architecture.

The Maryon Wilsons released their fields gradually for building, investing in new roads and sewers only as the market required, so avoiding the ruinous consequences of creating a glut.  The first step, in 1874, was the construction, along the boundary between the Maryon Wilson and Cotton Estates, of Priory Road .  This was followed by Canfield and Broadhurst Gardens in the late 1870’s, Compayne, Greencroft and Fairhazel Gardens chiefly in the late 1880’s and Aberdare Gardens and Goldhurst Terrace in the late 1890’s.  On the Cotton Estates land, adjoining, the construction of Acol, Woodchurch and Cleve Roads was begun in the 1870’s.
Spencer Maryon Wilson considered the area unsuitable for his grandest housing, which he planned for the supposedly more salubrious heights of Hampstead. His showpiece was to be Fitzjohn’s Avenue with massive, architect designed residences and large forecourts.  By contrast, the new roads between Kilburn and the Finchley Road were intended to be second grade housing for the middle-middle classes.  There were a few purpose-built mansion blocks – in Fairhazel Gardens, for example, with their trademark ogival cupolas - but most of the development was family housing, closely spaced, relatively simple in  decoration, built to certain patterns street by street and not individually designed.  Hardly any (2 Aberdare Gardens is an interesting exception) were intended for wealthy owners, so little stabling was provided for carriages – a sure sign of the status of an area.

Yet, by present day standards, the houses were by no means modest in scale.  They were built to accommodate three or four domestic servants as well as the usual large Victorian family.  Their rear gardens were extensive and while there were no drives, there were large enough planted areas at the front of the houses to merit the title “Gardens” which was conferred on most of the streets in the area.

Every effort was made to furnish as agreeable an environment as possible.  The roads curved so that different parts of them caught the sun at different times of day. The rear extensions, contemporaneous with the main buildings, were designed so as not to exclude light from neighbours’ properties nor to shadow adjacent walls and windows.  Fine trees were planted on the end boundaries of neighbouring gardens. The aim was to meet a growing middle income group demand for the fashionable “sweetness and light” type of dwelling – spacious, out of the smoke, well furnished with greenery and in the eclectic Queen Anne style, with its variations on Dutch gabling, classical doorways, romantic stained glass, iron work and terracotta decoration. The results (still supposedly protected by covenants restricting development or commercial use) stand as a monument to the enlightened late nineteenth century commercial development.
​

​The professional middle classes – doctors, teachers, lawyers, businessmen and women – have always favoured the area as have writers, painters and performers.

Famous names who lived in the area include the German-born Walter Sickert (1860-1942) a prominent member of the Camden Town Group of Post-Impressionist artists residing at 54 Broadhurst Gardens, and John Seymour Lucas  RA (1849-1923) the genre painter who lived and had a studio in the area (Woodchurch Road). At the junction of Woodchurch Road and West End Lane lived the influential architect and author, Banister Fletcher (1833-1899), whose impressive tomb can be found, and admired, in Hampstead Cemetery on Fortune Green Road. A good example of his work may be seen at the recently-restored Turret House, 82 Compayne Gardens.

From the world of literature, we have the eccentric Frederick Rolfe (1860-1913) author and self-styled “Baron Corvo” (69 Broadhurst Gardens). Much better-remembered these days is the American-born T S Eliot (1888-1965), poet, playwright, man of letters, Nobel Prize winner (Compayne Gardens).  The prolific writer and translator, and leading Zionist, Nahum Sokolow (1859-1936), born in what is now Poland but was then a province of imperial Russia, is commemorated by a blue plaque on his former home in Compayne Gardens.

In 1885 the Swedish physical education pioneer and champion of women's suffrage  Martina Bergman-Osterburg (1849-1915) founded the Hampstead Physical Training College on Broadhurst. She has a blue plaque on the building at No 1 Broadhurst Gardens, at the junction with Greencroft Gardens. On Acol Road we might have encountered the notorious Russian spy  “Kim” Philby (1912-1988), a member of the “Cambridge Five” spy ring. Not, perhaps, a South Hampstead resident to celebrate.

The influential film, theatre and documentary director Lindsay Anderson (1923-1994) lived at Sterling Mansions, at the junction of Canfield and Compayne Gardens. See the British Film Institute plaque at the entrance. He is best-remembered as director of the film “if..”, which won the Palme d'Or at the 1969 Cannes Film Festival.

More recently, the musician and broadcaster Jane Glover, the American rock star Chrissie Hynds, popular actor Stephanie Cole OBE (everything from Shakespeare to Coronation Street) and Australian comic actor Barry Humphries (along, presumably, with Dame Edna) have all made South Hampstead their home.  As have more than one member of the Foot family, a distinguished Hampstead dynasty of public servants, politicians and journalists.

The Canadian Mark Carney lived on Compayne Gardens during his time as Governor of the Bank of England (2013-2020).  To quote Time magazine's profile: "Central bankers aren't often young, good-looking and charming. But Mark Carney is all three - not to mention wicked smart."
​
Staying in the world of High Finance, on Canfield Gardens we might have met the French rugby legend Thomas Castaigmede  (54 appearances for the French national team, 1995-2007) who, upon retiring from professional sport, pursued a career in banking, in London and later in his native France.

Although The Beatles were never resident in South Hampstead, the Fab Four famously failed their audition for Decca Records at the label's recording studio on Broadhurst Gardens - now English National Opera's Lillian Baylis House. One singer who didn't fail his audition at Broadhurst Gardens was 1960s teen idol, Billy Fury.  The footpath between West End Lane and Finchley Road has been named “Billy Fury Way” in his honour. Another pioneer of British rock & roll – then known as skiffle – was Lonnie Donegan, who is commemorated by a plaque on Lillian Baylis House.

South Hampstead is, these days, a delightfully cosmopolitan area, but as can be seen by a reading of the above, twas ever thus.

In the interwar/ Second World War period refugees from central and Eastern Europe added to the varied cultural life of the district.  The large houses made them suitable for letting to numerous lodgers and the area became “landlady territory.”  Less desirably, some houses were turned into brothels – number 11 Aberdare Gardens , for example, catered for a flourishing wartime demand among servicemen during the mid-forties. There was considerable bomb damage to houses in Broadhurst Gardens, 19 Aberdare Gardens was gutted by a falling anti-aircraft shell and the fabric of many buildings in the area was shaken. 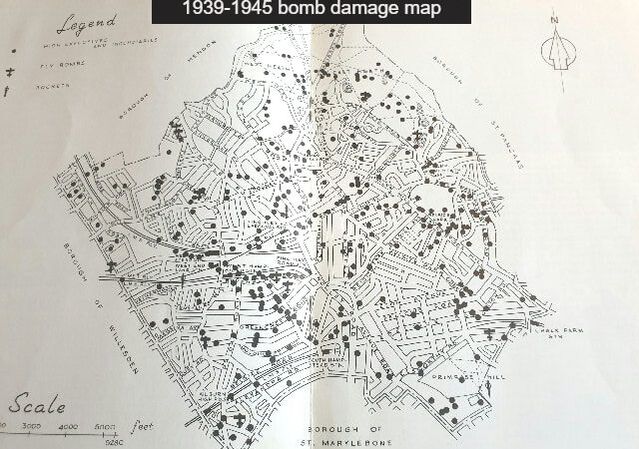 The gaps caused by enemy bombs were mostly filled in the post-war years by Local Authority housing. One such block of Council flats, Maryon House on Goldhurst Terrace, was recently demolished to make way for new private apartments, now (May 2021) rapidly nearing completion.
​
Inevitably, then, the houses in the South Hampstead Conservation Area have succumbed to rather more wear and tear than in the most prosperous parts of London which have been more consistently maintained.  The basic defect in the building – shallow foundations because of the high water table resulting in damp conditions – was apparent early on and has showed up increasingly in neglected properties as the years have gone by.  The hot dry summers of the eighties may be a distant memory but they caused widespread subsidence.  These factors, combined with the fact that until recently the unfashionable location made it a cheaper area for the property speculator, enabled unscrupulous developers to disregard the garden atmosphere and architectural merits of these streets in an effort to squeeze in as much extra accommodation and parking space as possible.

The history of the area shows how much careful thought went into the construction and design of the houses.  Spencer Maryon Wilson may have been a hard-headed businessman, but he had standards of excellence which should be an example to us today.  This is demonstrated by the quality of the builders to whom he granted leases and by the protective covenants he imposed which, regrettably, have been allowed to fall into abeyance. It's perhaps worth recording that the Maryon Wilson family retains its links with South Hampstead through the current Lord Gough (Shane Hugh Maryon Gough, 5th Viscount Gough) whose mother was a Maryon Wilson.​